Nollywood actress Rita Dominic and her husband Fidelis Anosike left guests in awe as they ticked off one of the day’s programs at their traditional wedding ceremony.

After all the rejoicing with friends, family members and fellow guests, the lovebirds finally had a moment to themselves as they took the stage for a private couples dance.

A video posted by actress Hilda Dokubo captured the moment the husband and wife held each other and gently moved their bodies to John Legend’s song All of Me. 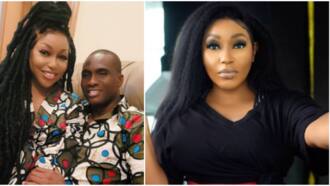 Shortly after their wedding, a man calls Rita Dominic’s husband for allegedly owing his sister N700k

The moment was made even more special and worthy of a fairy tale as fireworks lit up around them and lit up the passion on their faces.

Many at the scene couldn’t help but film the beautiful and moving moment.

Watch the lovely video below:

“Awwww, love is a beautiful thing ❤️❤️❤️❤️❤️❤️ congratulations to the last couple in town.”

“Beautiful bride she deserves all the happiness, she is adored congratulations.”

“It’s so beautiful. Wishing you Ritah marital blessings throughout.”

“Big congratulations to you Riri nwa, may God bless your new home with perfect peace and love.” 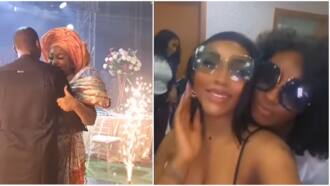 Meanwhile, Legit.ng reported that comedian Julius Agwu has dismissed rumors circulating on social media that he has health issues.

The veteran entertainer was spotted in a video posted by actress Hilda Dokubo at Rita Dominic’s star-studded wedding ceremony.

Agwu was not just a regular attendee as he was seen doing moves on the dance floor and even singing after the performer.