The celebrations continued late into the night as Zimbabwe players sang and danced after their stunning win over Pakistan in the T20 World Cup on Thursday. The African nation refused to bow under the pressure and toppled the former world champions by one point. 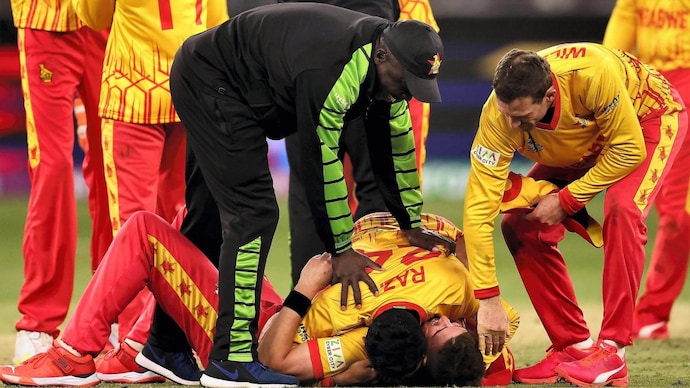 Zimbabwe players were thrilled after their win over Pakistan (Courtesy PTI)

By India Today Web Desk: Celebrations continued in the Zimbabwe camp as players and staff danced the night away after their stunning victory against Pakistan in the Super 12 stage of the T20 World Cup on Thursday.

In a drama-filled night, Zimbabwe won the coin toss and decided to beat first and got off to a flying start as captain Craig Ervine and Wessly Madhvere netted 42 for the first wicket.

However, Pakistan bounced back with Mohammed Wasim leading the charge and picking up four wickets on the night. He received support from Shadab Khan, who got three wickets to his name as the Zimbabwean innings ended with just 130 runs on the board.

The hunt for the former T20 World Cup champions was far from simple as they were reduced to 36 for three in just 7.4 overs. Khan and Shan Masood steadied the ship for Pakistan and it looked like they were on course to pick up their first points in this year’s tournament.

However, Sikander Raza had other plans in mind as the versatile player netted three quick wickets to leave struggling Pakistan at 94 for 6. Mohammed Nawaz and Wasim did their best to get the team across the line , but the Zimbabwean bowlers refused to bend under pressure and Brad Evans kept his composure in the final to secure a famous victory by one point.

Celebrations continued in the camp after the win as Zimbabwe Cricket released a new video showing players and staff singing and dancing the night away. Pacer Richard Ngarava happens to be the lead singer and skipper Ervine also showed off his dancing skills in the video which you can see below:

Zimbabwe will now face Bangladesh in their next game on October 30, while Pakistan will face the Netherlands on the same day.